He is a cartoonist with daily comic strips running in Connecticut and New York.

His arts/entertainment articles and radio program (of the same name) is www.nutmegchatter.com

The Nutmeg Chatter radio program airs Mondays at 3pm on WAPJ 89.9 and 105.1FM which can be found on tunein and on wapj.org 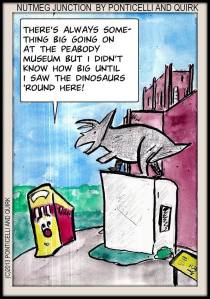 THE CRAYON DIARY: ARTWORK AND MORE